Should teachers be armed? 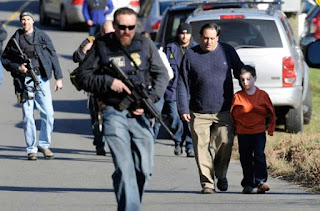 I guess one of the problems I have with arming teachers and expecting them to take a bullet for their students is the piece that ran in a local paper about restaurant service. "Seven of 45 called waiters to show them something on their phone usually about having problems with WiFi and wasted five minutes of waiter time." If you need to request the password in order to get onto the restaurant's wifi, then the time that uses up is the fault of the restaurant. Otherwise, if I'm having difficulties with the wifi, I consider it my responsibility to stock up a few stories on my phone or tablet that I can then read if the wifi isn't working. It's not the responsibility of waiters to know all about my technical devices. Not their profession, they're not trained to know anything about that.

I believe the same principle applies to teachers. Teachers are not soldiers or bodyguards. Not their job, not their profession. For that matter, it wasn't the job or profession of soldiers to rebuild Iraq. A soldiers job is to kill bad guys. For rebuilding another country, we need a paramilitary or protected "Colonial Corps" of people who can administer cities, towns and villages. We can expect all human beings to go above and beyond the call of duty on rare and exceptional occasions, but let's not ask teachers to carry guns. Let's stick to having them stay within their chosen professions and expertise.

And no, no one goes to school to open fire at because it's in a "gun free zone." They go to the school because they want to shoot up the school. Period. Full stop. Gun free zone or not, the shooter often intend to die, so if a person pulls out a gun to stop them with, they're probably going to welcome being killed.  USA Today listed a whole series of times that a mass shooter has struck at a military base from 1994 through 2014

Teachers are under-equipped and underpaid. They often have to purchase school supplies out of their own salaries. When I was in the Navy, I paid for absolutely nothing that I needed to perform my duties with. Everything I needed was supplied by the service. Most jobs in the US work that way and have done so since the Industrial Revolution began (which was right after the Civil War). I think most teachers would object to adding being armed guards to their already-heavy load of duties.

How well-equipped are classrooms now? Remember the students who had to come to class in heavy coats? Just last December, a high school in Baltimore, due to an aging heating system breaking down, had students report with coats and blankets in order to continue their studies. As long as something like this happens anywhere in the country, then no, we don't have the resources to add firearms training to teacher schedules. 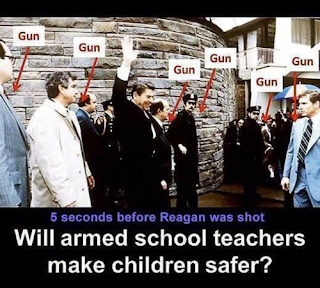 Suppose teachers are armed. Note that President Reagan was surrounded by armed people in 1981 and suffered wounds from a shooter anyway. What's the difference today? Are bodyguards or the Secret Service braver or more self-sacrificing? No, it's because when a high-value target is going to be out in the open, the Secret Service locks down the whole area. I was in a similar lock-down when I and my sister visited Ireland in the late 90s. We were strolling down the street and all of the sudden, we noticed black-uniformed, heavily-armed guards lining the street at about 10 or 15 yard intervals. I looked around and sure enough, there was an armored car delivery being made. Clearly, they still recalled the days when they had to worry about IRA attacks.

And hey, good on Senator Marco Rubio (R-FL), who brings up the very good point that arming teachers means that it could be difficult for first responders to distinguish between teachers trying to defend their students and the actual shooter.

Finally, it's important to keep in mind that in the 2017 mass shooting in Las Vegas, the bullets fired by the shooter traveled 300 yards to reach their targets. Those bullets were traveling downwards and the shooter had more than one window to shoot from. Returning fire was possible, but only if one was a professional sniper with a high-powered rifle. Having people armed with pistols in the crowd would have made absolutely zero difference.