Anger and division in America 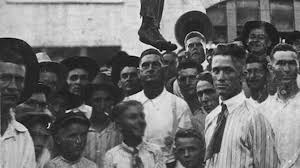 So, after I put a comment onto Facebook, I will then, weeks or months later, take select comments and put them onto prawnworks, where they'll be permanently archived. Having been a history major back in college, I use that second draft to correct spellings, flesh out or clarify comments a bit more and sometimes do a bit of research to answer questions the comment may raise. I did that last thing with the following.

I thought "Hmm. Okay." It took me about half a minute on the search engine to locate conservatives being angry and divisive.

Here's a link to NRA Spokesperson Dana Loesch claiming that "There were people rushing the stage and screaming 'burn her.'"

That didn't sound like any protest group that I've ever been part of and I've been to quite a few liberal protests. I put another half-minute into another search and sure enough, Loesch was lying:


That's another easily provable lie, at least according to multiple videos and eyewitness testimony from Wednesday's event. The clearest video, above, shows Loesch calmly leaving the stage while the crowd chants, "Shame on you!"

After a New Times photographer put out a call on Facebook, five attendees sent footage they shot of the aftermath of the town hall. One video begins immediately after the town hall ends and shows Loesch walking off the stage surrounded by other participants and security. She then walks away and out of the arena. At no time does anyone in the audience approach her, and there's certainly no evidence that anyone ever "rushed the stage."

"She walked right in front of me and people yelled at her and chanted, 'Shame on you!' Nobody rushed the stage," says Ryan Yousefi, the New Times reporter who covered the event.

So yeah, the Vice President is correct. There's a lot of anger and division in America right now. It was obvious that he intended to have his listeners think, of course, that it was all the fault of liberals and not of his own side.
Posted by Rich Gardner at 07:47 No comments:
Email ThisBlogThis!Share to TwitterShare to FacebookShare to Pinterest
Labels: civility, fraud, free speech, gun safety, lying
Newer Posts Older Posts Home
Subscribe to: Posts (Atom)