This was getting so few viewers, I felt I had to grab a showing before it left town and would only be available as a rental (All the Blockbuster Video shops in my area have closed, so that means I'd have to get it from either my cable company or from the Internet). Good stuff! Machete (Danny Trejo) is visually believable as the guy who survives whatever the movie can toss at him, and hoo boy! Does the movie toss a lot at him!
Believable? Not a bit. The body count goes way beyond believability very early on. Some actors whose careers have seen better days get to have a lot of fun chewing the scenery here. And of course, lots of hot women are trying to either kill Machete or to get his romantic attention (It's tough to be one 'a them thar super-heroic types).
Posted by Rich Gardner at 00:08 No comments:
Email ThisBlogThis!Share to TwitterShare to FacebookShare to Pinterest
Labels: culture

Saw Gravity tonight. Cool stuff! I had seen some items on the science versus the drama of it and yeah, there are a number of scientific problems with it, but both of the pieces I looked at agreed with my assessment that it was an enjoyable film. Yeah, I'd chalk up all the bad science to the plot/drama needs of the film. Definitely recommend seeing the film before reading about the science.
Posted by Rich Gardner at 23:27 No comments:
Email ThisBlogThis!Share to TwitterShare to FacebookShare to Pinterest
Labels: culture, science

Media Matters For America (MMFA) announced that right-wingers Ben Shapiro and David Horowitz were collaborating on a right-wing competitor to MMFA. MMFA cheerfully reproduced Shapiro's comments to his fellow right-wingers as Shaprio explained to his buddies that MMFA was an extraordinarily powerful and competent foe that they'd do well to copy.

I took a look at one of the pieces on Shapiro's site. I took a screenshot and highlighted two of the sentences. 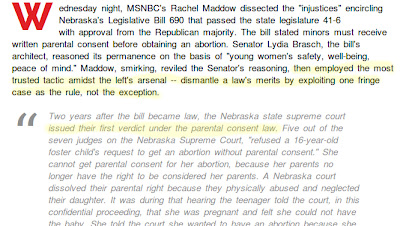 The sentence that says: “Maddow smirked, reviled the Senator's reasoning, then employed the most trusted tactic amidst the left's arsenal – dismantle a law's merits by employing one fringe case as the rule, not the exception.”

I took the screenshot to emphasize how this assertion was immediately followed by Rachel Maddow's own description of the case: “Two years after the bill became law, the Nebraska state supreme court issued their first verdict under the parental consent law.” [emphases added]

Yeah, that's kind of a problem. How can “the left” be “employing one fringe case” when there's only one case to examine?!?!?

One interesting question comes up. “The girl at the center of the case is now more than 4 months pregnant and she was only ten weeks pregnant when the state of Nebraska first denied her permission to have an abortion." Maddow discusses how the girls birth parents are no longer around to give their permission for an abortion.

A look at the comments shows lots of people clucking their disapproval of the fact that a 16-year old girl was engaging in sex to begin with. Maddow states that “A Nebraska court dissolved their parental right because they physically abused and neglected their daughter.” Sounds an awful lot to me as though the girl became pregnant as a result of incest, but again, the privacy of various people is clearly being protected here. My presumption is that, again, there are sound legal reasons for this.

The most obvious conclusion that I draw here is that there are very good reasons why the State of Nebraska shouldn't be meddling in pregnancy/abortion decisions to begin with. The case is obviously beyond their competence and it clearly should be left to those who are immediately concerned with it. Also, Shapiro's “TruthRevolt” site doesn't appear to be very competent at this whole media criticism thing as neither the blogger nor the editor seems to have any idea as to what they're doing.
Posted by Rich Gardner at 08:26 No comments:
Email ThisBlogThis!Share to TwitterShare to FacebookShare to Pinterest
Labels: incompetence, poor judgement, stupidity

On Saturday, the 5th of October, I went to the Social Principles Conference of the Eastern Pennsylvania Conference of the United Methodist Church, where we listened to "The Social Principles: Our Call to Action" by Jim Winkler, of the General Board of Church & Society, followed by a series of workshops. Nancy Tkacs later told me she was also there, though I didn't see her at the time.

I attended the Climate Change and the Implementing the Social Principles in Your Church workshops.

The sermon by Pat Hoerth of the Perry First United Methodist Church of Perry, OK, has a good run-down on the challenges faced by the people of this planet (Pat gives facts and figures about Global Warming starting on page 10 of the PDF) concerning the enormous amount of carbon dioxide that industrial society is pumping into the air and the effect that all that carbon is having. Unfortunately, Hoerth reports that we might reach 399 parts per million (ppm) of carbon dioxide in our atmosphere (275 ppm is the proportion that we all enjoyed in ages past, 350 ppm is the maximum safe limit) by the end of this century and 350.org reports that our air is already at 400 ppm. And yes, certainty that Global Warming is caused by humans has now reached 95%, meaning we as a race, are long past the point where action became necessary.

The official Methodist position on Global Warming is contained in the Social Principles of the United Methodist Church - 160.D Global Climate Stewardship:

We acknowledge the global impact of humanity’s disregard for God’s creation. Rampant industrialization and the corresponding increase in the use of fossil fuels have led to a buildup of pollutants in the earth’s atmosphere. These “greenhouse gas” emissions threaten to alter dramatically the earth’s climate for generations to come with severe environmental, economic, and social implications. The adverse impacts of global climate change disproportionately affect individuals and nations least responsible for the emissions.  We therefore support efforts of all governments to require mandatory reductions in greenhouse gas emissions and call on individuals, congregations, businesses, industries, and communities to reduce their emissions.

The introduction to the Implementing the Social Principles in Your Church module makes it clear that supporting social justice goals requires both justice and charity. If you don't work to perform works of charity (and thus perform direct services for those who are unable to provide those services themselves), then there's no guiding purpose behind your actions. If you don't perform those actions for the cause of serving justice (and thus press for social change that will provide more permanent solutions), then you might grow to eel superior to those you're helping.

The Methodist Church has Peace with Justice Grants, money for pursuing various goals:

They also support groups like Equal Exchange, a program that sees to it that small-scale farmers are paid fair, honest and reasonable prices for their produce.

What does The Bible say about paying a living wage? A Methodist Church pamphlet lists four passages supporting living wages and quotes the 1908 Social Creed, which calls for “A living wage in every industry. The highest wage that each industry can afford and for the most equitable division of the products of industry that can ultimately be devised.”

The UMC statement on the government shutdown appears a bit too even-handed and “both sides are to blame” for my own tastes, but it calls attention to both the Federal employees and the regular people that are being hurt by the shutdown and contains no arguments that oppose the Affordable Care Act/Obamacare, the ostensible target of the shutdown.

All in all, a good and useful gathering.