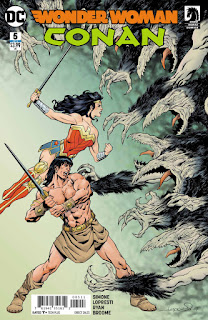 Posted by Rich Gardner at 05:20 No comments:
Email ThisBlogThis!Share to TwitterShare to FacebookShare to Pinterest
Labels: culture

Has the NRA had its day? 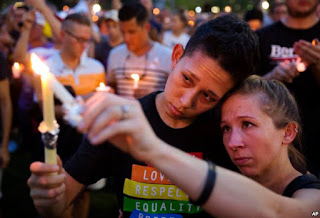 FILE - People hold candles during a vigil downtown for the victims of a mass shooting at the Pulse nightclub in Orlando, Florida, June 13, 2016

Columnist J. Peder Zane in "Frightened children should not be driving national policy on a deeply divisive issue" (Mar 1) asks why we don't have good data on mass shootings. I don’t agree that it's because they're rare. Out of the 10 deadliest shootings since 1966, we’ve had five mass shootings including and since the 2012 Sandy Hook slaughter at an elementary school. No, it's because the 1997 Dickey Amendment specifically prevents federal agencies from taking positions that are favorable to the side that wants to see further restrictions on guns.

Do people who favor safety from uncontrolled guns take a "knee-jerk reaction" and accuse the NRA and their followers of having a "collective guilt" over such shootings? I suppose they do, but the NRA has had many years since the mass shooting at the Columbine High School in 1999 and at Sandy Hook in 2012 to come up with any sort of answers as to how to deal with mass shootings other than to flood the country with still more guns with ever less accountability. The NRA answer has proved to be a very poor one and the Dickey Amendment prevents us from examining the liberal answers to gun safety.

Zane finds the display of raw emotion on a CNN broadcast distasteful, but the NRA has had its day and doesn't want to surrender any control over gun policy, so I'm not sure what else we're supposed to be doing. Zane wants us to focus on homicides in general, but most mass shootings take place using semi-automatic rifles and the national conversation is currently about mass shootings.


"In the days following the shooting, evidence mounted that the Parkland rampage was not a failure of gun laws but law enforcement." Why can't the conversation be about both? The shooter had access to a weapon that was more suited to a battlefield than it was to any reasonable civilian purpose because the NRA supports civilians having such weapons. Yes, not responding to many calls before the shooting was inexcusable. I don't know the story on that.

Yes, it would have been nice had the law enforcement people on the spot marched bravely into a place where a likely-suicidal gunman was mowing people down as quickly as he could. A piece from NBC News says:

Peterson was the first member of the Broward County Sheriff's Office to report the gunfire, DiRuzzo said. He also gave the local SWAT team keys to the building where the shooting happened, drew diagrams of the campus for them, and helped school administrators access security videos, DiRuzzo said.

This indicates to me that the first responders realized that stopping a heavily-armed shooter with no fear of dying was an extremely dangerous and most likely suicidal move and that an armed and armored SWAT team was far more suitable for the task. Simply having had guns wasn’t sufficient to ensure the lawmen would have survived had they gone in. There are ways to motivate people to rush into certain death on the battlefield, but it’s asking too much to expect regular civilians to do that.


Nobody I know is in favor of a total ban on all guns. We favor things like reducing magazine size to no more than six or ten bullets because, if we do a cost-benefit analysis, it's fun and amusing to have more than that, but mass shooters really like having 30 to 50 bullets that they can fire without reloading. The few seconds it take to change out magazines can be critically important for people on the other end of the barrel to either escape or to rush the shooter. The Chicago Tribune reminds us that: “The man who shot Rep. Gabby Giffords in Tucson, Ariz., in 2011 was subdued after he stopped to reload his pistol, which had a 33-round magazine.” Smaller magazine size could directly and immediately save lives by complicating the jobs of shooters.

Yes, I and many others are in favor of rewriting the Second Amendment so that it more reasonably balances the interests of the NRA and their critics. We’d like to rewrite it so that we balance the interests of the NRA, sports shooters, hunters and those who need guns for self-defense with the interests of those who would like to see an end to mass shootings.
Posted by Rich Gardner at 17:29 No comments:
Email ThisBlogThis!Share to TwitterShare to FacebookShare to Pinterest
Labels: gun safety, history, law
Newer Posts Older Posts Home
Subscribe to: Posts (Atom)