Jesse Ventura ran a list of how Hillary Clinton and Jeb Bush are two peas in a pod.
My responses:

5. False equivalence. There's no evidence Clinton is hiding anything by having used a private email account. I didn't agree with her doing so once I heard about it, but her supervisor didn't object to it. Bush has not hid anything so much as he's made selective disclosures of his email. He's been completely silent on many very important subjects, but if his brother doesn't get subpoenaed then he won't either.

9. Good to hear they both believe that climate change is a real and serious thing.

10. Clinton has kept away from loudly and forcefully criticizing the TPP, but she certainly hasn't praised it either, so I wouldn't count her as a supporter.

13. Green groups are divided on how close she is to the oil industry. “Her environmental record as secretary of state from 2009 to 2013 includes launching a global initiative to reduce emissions of soot and some greenhouse gases, though not targeting carbon dioxide, the main culprit in global warming.”

Interesting piece, but I wouldn't regard it as the final word. Yes, there's some tension between her commitment to stop global warming and her oil industry ties. Certainly worth following to see how that plays out.

Update: This is a very hopeful sign. Clinton makes a strong bid to support renewable energy. A very good thing in any event, but especially good concerning her oil industry ties.
Posted by Rich Gardner at 21:53 No comments:
Email ThisBlogThis!Share to TwitterShare to FacebookShare to Pinterest
Labels: presidential campaign


So I was scanning an old comic (Spider-Woman 37, 1981), scanning allows me to save an electronic copy while passing on the paper copy, and I see that it has circulation figures. Back in those days, the shops ordered as many comics as they thought they could sell and returned the unsold comics to be pulped. Nowadays, they order as many as they think they can sell and how they deal with the extras, well, that's their business. As there's a healthy back issue business (A customer can purchase an issue printed years ago, sometimes an issue will be sold and re-sold a few times), the issues often sell long after their usual time on the shelf has expired. 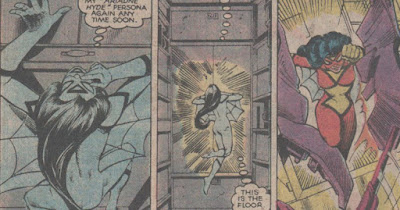 So I see that for Spider-Woman (Her title was being written by the acclaimed X-Men writer Chris Claremont and drawn by Steve Leiloha*) the average number of an issue printed was a bit over 283,000, the average number of issues actually sold was over 127,000. So I figured, hey, with all of these superhero movies out and with Spider-Woman having been revived (The first series ran from 1978 to 1983 and she started off again in a new series in 2009), the sales for today's Spider-Woman must be pretty good. 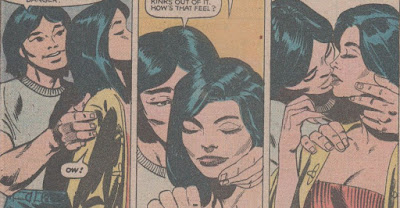 As they say, the lead actor is frequently just a handsomer version of the director. Hmm, the artist is half-Hawaiian.

Has the popularity of comics declined or have they stayed about the same? I think one could make a pretty good case that comics have remained roughly the same in popularity and that buyers have just spread out to purchasing many more titles, but as I was told when I tried to sell off some old issues, TV shows, video/computer games and other electronic amusements have bit very deeply into the popularity of printed comics. So I think, overall, superheroes are much more popular, but the actual printed comics are at about the same level of popularity.

Update: It makes sense that price would have an effect. Marvel Comics went for $0.50 in 1981 and go for $3.99 today. The InflationCalculator says $0.50 in today's dollars would be $1.31 now. So Marvel makes an extra $2.68 today, over and above inflation. Is that a good deal for the consumer? Actually it is, as it means both better paper and better printing, but it also probably more than enough to push a comic out of the price range of more casual buyers and thereby lowers the number of issues sold.

*Comics are drawn first by a penciller, who often collaborates closely with the writer, and is then inked so that the lines will show up for the printing plates. The inker can have a serious effect on the finished artwork. Leiloha had been an inker for many years before taking up the pencilling job on Spider-Woman. So although he was new to the job of pencilling, his work was well-known to comics fans
Posted by Rich Gardner at 14:42 No comments:
Email ThisBlogThis!Share to TwitterShare to FacebookShare to Pinterest
Labels: culture

Saw that Ted 2 was playing in the theater and regretted that I never saw Ted. Finally caught Ted on cable and just saw Ted 2 tonight. There are rules for fantasy films. The characters can exhibit fantastical, amazing abilities and characteristics, but the rules have to be applied consistently and the story has to ring emotionally true. The dialogue has to sound like what people would actually say. In this regard, the Ted films pass with flying colors.
Posted by Rich Gardner at 00:00 No comments:
Email ThisBlogThis!Share to TwitterShare to FacebookShare to Pinterest
Labels: culture
Newer Posts Older Posts Home
Subscribe to: Posts (Atom)