Right-wing Letters to the Editor

Friend of mine said the Los Angeles Times devoted their entire editorial page to what they felt were under-represented right-wing views. It's worth it to go through them to know what the other side is thinking. Naturally, I had lots of objections tat I've posted here.

In answer to Cecil Stalnaker, my objection to Trump has primarily been that he simply can't do the job. He's incompetent. he's also evil, but the fact that he brings nothing to the table in terms of answers to the problems that Americans are concerned about is my primary objection to him.

To Deborah McMicking, okay. Where is your proof that Trump fans are not "racists, misogynists, white supremacists and more"?

To Brian J. Goldenfeld, but the “Russian collusion” was real! It was based on solid, verifiable facts! Remember, the Senate did not dispute anything that was brought up during impeachment.

To Steve Murray, yeah, I don't have anywhere near as much faith that charter schools are worth taking time and money and attention away from traditional schools. I just don't think that capitalist rules concerning the purchasing of couches. cars and clothes apply to schooling.

To Greg Winters, yeah, the Philadelphia Inquirer does what you suggest a lot. It features conservative writers and rarely prints rebuttals to them that readers send in.

To Joe Blackman, does private enterprise have a great deal to contribute to the battle against climate change? Yes. Absolutely. Problem is, it isn't enough. Had the fight against climate change been truly joined in the 1970s, when people first suspected that too much carbon was having a bad effect, we could have afforded to allow free enterprise to set the pace. But the battle now needs to move faster and more decisively. It needs the federal government to throw all of its considerable weight into the field.

Asian and European countries have showed without question (Sweden and the other Scandinavian countries formed a good controlled experiment on this) that masks and discouraging large gatherings of people that were dining, drinking and/or singing together is extremely effective in preventing the spread of the coronavirus. Other things are important, but nothing is more important than survival.

We determine who a racist is by their words and actions, not by those other factors.

Trump supporters are wrong on the facts and the science. Period. Full stop.

Yes, I do understand what my opponents are saying. They're very often just plain wrong.

To Elaine Vanoff, I'm sorry, but "Contrary to many people’s opinions, this president has a sense of humor." Really? Seriously? Can you supply any examples from the past four years? Heck, from any of his public statements from the past 20 years? Can you name anything he said that wasn't cruel or vicious or hateful? All of his "humor" consists of insults.

To John Lynn, I apologize that the left has not defined its positions carefully enough, but seriously, if you're puzzled by the statement "defunding the police," please don't expect Fox News host Sean Hannity to explain it to you. Representative AOC has explained what it really means. It really helps to look up what people really mean in their own words rather than to rely on opponents of theirs.

Aughh! The stupid! It burns!

Mercedes Schlapp tells us what the President means.

1:00 minute mark: Utter and complete revisionist horse$#@%! The President did ***nothing*** to encourage the productions of needed equipment for fighting the coronavirus!

1:20: It was HARDLY the unique inspiration of the President to press for a rapid cure!

1:30: Again, this is why liberals consider the President to have been completely unqualified for his job from the outset! Why did he need to get sick in order to understand how serious COVID-19 was?!?!?!

1:50: What’s the alternative to “being in lockdown?” Duh! 3% of the people who get the coronavirus DIE!!! About 20% need to be hospitalized. This is no joke, people!

2:05: Uh yeah, actually. Staying indoors and not taking unnecessary risks DOES work! That’s why all of the other advanced nations are in much better shape than we are!

Posted by Rich Gardner at 15:00 No comments:
Email ThisBlogThis!Share to TwitterShare to FacebookShare to Pinterest

For years the Dems have been preaching how unsafe and rigged our elections have been. Now they are saying what a wonderful job the Trump Administration did in making 2020 the most secure election ever. Actually this is true, except for what the Democrats did. Rigged Election!

To which I'd answer:

Posted by Rich Gardner at 13:49 No comments:
Email ThisBlogThis!Share to TwitterShare to FacebookShare to Pinterest

Letter to the Editor 10 November 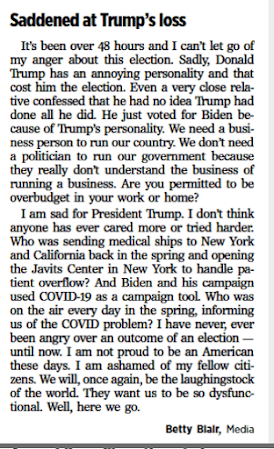 The letter-writer writes to the Philadelphia Inquirer to express her support for President Trump.

First, she learns from a relative of hers that the relative opposed Trump strictly due to his personality. I agree that this is a really stupid reason to oppose a politician. The younger George Bush was reputed to be a really cool guy to have a beer with. I have no doubt that he would be. Problem is, he ignored warnings about 9-11, launched the completely unnecessary Iraq War, left people stranded after Hurricane Katrina and opposed efforts to work against climate change. Does being a cool guy to have a beer with make up for any of that? Hardly.

She feels businesses are never over-budget. Erm, consumers and businesses both take out bank loans for cars, houses, equipment, paying employees when a business first starts up, etc. That’s exactly how deficit spending works. The government gives itself a loan by selling bonds and pays those bonds off. If she were really serious about how terrible deficit spending was, she would have opposed Trump’s 2017 tax cut that exploded the deficit!

Did he care and try hard to solve national problems? Hardly. A reporter noticed that he couldn’t specify what he had done about COVID-19 during the months of February and March. That’s because he spent that time pretty much just sitting around and twiddling his thumbs, playing golf, conducting rallies and firing people who had crossed him during his impeachment. Obama spent eight years playing 306 golf games. Trump has spent half that time playing, at this point, 297.

The hospital ship USNS Comfort (T-AH-20) was indeed sent to New York City on 30 March, long after it was clear that there was a worldwide pandemic that required a “All Hands on Deck” approach and as NYC was reaching its peak caseload.

Was President Trump informing us in the daily briefings or would actual scientists giving us detailed facts and figures have done a better job? Was it helpful for Trump to have speculated that for people to have injected themselves with bleach? Or would he have been better off actually attending the meetings of the scientists that happened before each briefing?

Will we “again, be the laughingstock of the world” when Biden takes over? Or did the laughing start under Trump?

Answer to the Pittsburgh Post-Gazette

The Post-Gazette tries to defend the President’s record. They repeat the same, tired old yada-yada about there having been a “boom,” but really, job creation levels have not been terrible, but weren’t spectacular, either.

The piece then talks about lowest Black unemployment, which was clearly due to Obama’s policies.

It talks of trade relations. I don’t follow that closely, but knew that soybeans were the biggest issue for a while. How’s that doing? Oops! “YTD: U.S soybean sales to China lowest in 5 years”

Sending jobs overseas. What has he actually done about that?!?!? Moving the debate is all very fine and well, but actually getting something done on the issue will require focus and attention to detail, neither of which he’s known for.

Being a Democrat, I’m not the slightest bit impressed with his putting “originalists” onto the Supreme Court. Amy Coney Barrett is only “best” if you ignore her extremely rushed confirmation and how completely out of step she is with Americans in general.

Energy? Well, yeah, energy has been going great if you regard burning more fossil fuels as good. That’s obviously NOT good if you know anything about the science of climate change.

This is really sad:

Has Mr. Trump handled the pandemic perfectly? No. But no one masters a pandemic. And the president was and is right that we must not cower before the disease and we have to keep America open and working.

Actually, most of the countries on the planet have handled the pandemic far better than Trump has. The very first thing we desperately needed to do, and which the US miserably failed to do, was to produce Personal Protective Equipment (PPE). This failure is especially sad as producing equipment for wars has been a specialty of the US Government going back at least to the Civil War.

And yes, I agree with and endorse this sentiment 100%!

He is not a unifier. He often acts like the president of his base, not the whole country. He has done nothing to lessen our divisions and has, in fact, often deepened them.

This is probably the single most important job any president can have. To move the country in a direction that’s healthy for all Americans. The people, united, have a wisdom that exceeds that of any one individual or party. The president can move out ahead and can slowly bring people along. See Barack Obama and gays in the military. By moving slowly but purposefully, he repealed the Clinton-era “Don’t Ask, Don’t Tell” policy and instituted full equality. Trump can’t do anything like that because he simply isn’t disciplined enough to pull it off.

How has Trump done at turning people against DACA or the Dreamers? Not so hot.

In fact, the poll indicates that wide swaths of registered voters support Dreamers regardless of gender, education, income, ethnicity, religion and ideology. That includes 68 percent of Republicans, 71 percent of conservatives and 64 percent of those who approve of the job Trump is doing.

From the very beginning of his presidency, Trump has opposed the Dreamers. At this late date, he clearly hasn’t brought anyone along with him.

The Post-Gazette has a lot of criticisms of Biden, but all of that is based on sheer guesswork and their peering into a crystal ball.

Color me extremely unimpressed! Vote out Trump and put in Biden!