Press Secretary Sarah Sanders goes into a lengthy defense of President Trump and his policies.

First off, "white supremacist" is more of just a plain old, accurate description of President Trump than it is an over-the-top insult. Basic problem with the Press Secretary's defense of the President is that it presents Trump as someone that the actual person bears no resemblance to.

Second, I find it quite interesting that Sanders has to go all the way back to May 2017 when Kathy Griffin presented a stunt photo (depicting Trump as beheaded) in order to find examples of "unfairness" towards him. As a matter of fact, public reaction to Griffin's stunt was so strongly negative, she essentially didn't have a comedy career for over a year. People now consider that she's spent enough time in penance that she's now rehabilitated and she's now doing comedy again.

If, on the other hand, we were to look for examples of a fascist, white supremacist-style policy on Trump's part, the policy of separating the children of brown people* from their parents on the Mexican border is a current, today, right now example.

*Most of the current group of migrants comes from Central America, where they're fleeing violence, gangs, drugs, etc.

Posted by Rich Gardner at 16:39 No comments:
Email ThisBlogThis!Share to TwitterShare to FacebookShare to Pinterest

Just because I like to occasionally riff on stuff that’s not of earth-shattering importance.

Look at superheroes. We all got very excited about the recent Black Panther film, and the first black superheroes. The film took in more than $1.3-billion worldwide, proving once again that there is a huge black market.
Some people argued that it wasn’t a big deal. There were always black superheroes. What about Blade, Hancock, Cyborg and Iron Man’s sidekick? Black people should stop being greedy, I mean, there are at least five black superheroes. How many do you they want? Well, do you know how many there are in total? Marvel lists 7,000 official characters. DC Comics claims to have more.
So five out of a possible 14-15 thousand?! Yes, black people, you should be satisfied with that. Know your place.

There have been cool characters since, the new X-Men (Wolverine, Storm, Colossus, etc.), the re-booted Swamp Thing, his occasional foil John Constantine, The Endless (Dream, Death, Desire, etc.), the new Teen Titans (Cyborg, Raven, etc.). But yeah, as most of the possible powers and character types have been used up (The Legion of Superheroes has made some appearances in DC TV shows, but characters like Shadow Lass and Triplicate Girl are kind of ridiculous and hard to find useful employment for), it’s hard to assemble diverse teams today without deciding to, say, turn Nick Fury from a white character into a black one.

Spider-Man has done a good job with diversity. The initial character Peter Parker is getting a bit aged. Marvel ages its characters about a year for every seven years that pass in the real world. Franklin Richards, son of Reed and Sue of the Fantastic Four, was born in the mid-60s but is only in his tweens today. So even though Parker was a high-schooler back when he was invented, he’s long since graduated college and is running his own company.

So, time for a new Spider-Man, one who isn’t quite so old. Marvel decided to make the younger Spider-Man black. Hmm, how to get a female Spider-Man? Well, Gwen Stacey was Peter’s first love and she died tragically back in the 70s, so how about a Gwen from a different dimension who received spider-powers instead of Peter? Niches can be found, but it takes some imagining to fill them without just throwing all-new characters at people.

Ms. Marvel is filling another niche. Captain Marvel was a blond male. When he died, Ms. Marvel, a blond female, took over. The blond female has since taken up the Captain Marvel name while the name of Ms. Marvel went to a Muslim Pakistani teenager (She wears a very modest outfit and her comic goes into her family and background). So again, Marvel is trying to introduce new characters without just coming up with completely all-new creations.

But I agree. There aren’t enough females and not enough non-white characters. Superhero comics and their movie and TV spin-offs need to do better.

-------
In order to look up any of the characters I've named, go here for Marvel character and here for DC characters.
Posted by Rich Gardner at 23:55 No comments:
Email ThisBlogThis!Share to TwitterShare to FacebookShare to Pinterest
Labels: culture

Response to an LTE 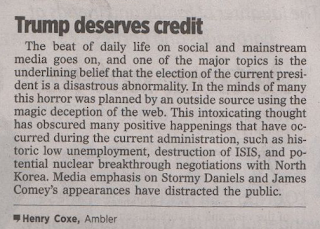 Interesting LTE in the Philadelphia Inquirer on June 5th. Yes, I believe the writer meant “underlying” belief as opposed to “underlining,” but yes, I sort of halfway agree that the election of this President was a “disastrous abnormality.”

Has the election of Donald Trump been a disaster? Absolutely! The separation of children from parents at the border with Mexico puts us in a moral league with Nazis and the KKK, with the lowest of the low. The US did not sink to such a low moral level during World War II when citizens of Japanese descent were placed in internment camps. George Takei, who played “Sulu” in the “Star Trek” of the 60s, describes his experience as a child when he was in such a camp and he makes it clear that there was no separation of families at that time.

As former VP Joe Biden once said: “Don't tell me what you value, show me your budget, and I'll tell you what you value.” How does the Trump budget look? As a pundit in The Hill put it:


How are Trump’s people on foreign policy? On May 21st, Secretary of State Mike Pompeo gave a lengthy speech to a friendly audience on policy towards Iran. “Over 26 minutes, Pompeo articulated a strategy that can best be summarized as, ‘Do everything we say, or we will crush you.’" The speech did not present any rational objection to Obama’s Iran policy, despite the President having objected to it for a number of years and having criticized it in the bitterest of terms.

Was the election of Trump an “abnormality?” That’s much harder case to make. Al Jazeera said back in May that the issue of white supremacy applies from South Africa to Gaza to the Trump Administration and their supporters. “...apartheid in South Africa was just one of many expressions of a worldwide race-based system of domination and privilege that to this day feeds wealth and prosperity to the selected few whites at the top.”

On the education of women: “Ironically, in light of the strong correlation between female education and demographic decline, a purely empirical perspective on Malala Yousafzai, the poster girl for global female education, may indicate that the Taliban’s attempt to silence her was perfectly rational and scientifically justifiable.”


The theory of Senator Bernie Sanders (I-VT) during the campaign of 2016 was that Americans were primarily concerned about the economy. A lo of his supporters were, but it appears that racial resentment played a big role, too.

Was the Trump Administration “planned by an outside source using the magic deception of the web?” Well, Chris Matthews of MSNBC thinks the Mueller investigation is driving the President absolutely crazy. Trump’s claim that he can pardon himself (It isn’t against the Constitution for a president to pardon himself, but it’s a fundamental precept of English common law that “no-one should be a judge in his own case”) and various co-defendants are facing great pressure to cooperate in the investigation, which strongly suggests that there’s lot of substance behind charges that the Russians interfered in the election of 2016.

1. “historic low unemployment.” True. CNN-Money reports that unemployment is very low., but that was in October of last year, at the end of a “85-month” expansion where unemployment steadily dropped. In the included chart, there’s no obvious change in the trend line when the Obama presidency dropped off and the Trump presidency began.

2. “destruction of ISIS.” Again, true. From the New Yorker: “Operation Inherent Resolve is the U.S.-led coalition of sixty-nine nations and four partner organizations that has orchestrated the military campaign against ISIS and provided air power in both Syria and Iraq. Since 2014, its lone goal has been to end the caliphate...” What this quote makes clear is that Trump didn’t begin anything new. He just continued what was already in progress.

3. “nuclear breakthrough negotiations with North Korea.” Is the Trump Administration carrying out any sort of long-range plan to do this? Uh, no. “...the American president has refused to do substantive work ahead of the scheduled negotiations. As one senior administration official, put it, ‘He doesn’t think he needs to’ prepare.” Was there any substantive work on the President’s part prior to this? A review of the past year and a half doesn’t show anything impressive. There are certainly signs of diplomacy taking place and we certainly don’t know everything that’s going on behind the scenes, but National Security Adviser John Bolton’s statement that North Korea should follow the Libya model for denuclearizing was certainly not helpful and in fact, was cited by North Koreans as a reason to cancel the planned summit. This stumble makes me doubt that anything else behind the scenes is any more sophisticated or informed.

So, no. I’m not terribly impressed by President Trump’s performance. Out of the three items cited here, two of them were simply continuations of Obama’s policies and the third appears to be due more to factors outside Trump’s control than by anything he’s planned.
Posted by Rich Gardner at 15:54 No comments:
Email ThisBlogThis!Share to TwitterShare to FacebookShare to Pinterest
Labels: budget, corruption, diplomacy, poor judgement, stupidity
Newer Posts Older Posts Home
Subscribe to: Posts (Atom)