A community responds to police abuses

The St. Louis Symphony was interrupted right after intermission with about 50 people dropping banners and singing “Justice for Mike Brown.” The woman pictured above was caught on camera, apparently wondering why her previously-pleasant evening was being so brazenly disrupted. The fellow beside her, looking up at the balcony, was filmed moments previously, smiling broadly. The St. Louis American piece reports that “Some onlookers were outraged and start spewing expletives. Others stood up and started clapping. Most seemed stunned and simply watched.“

The singing was a response to the Michael Brown killing and its tense and sometimes chaotic aftermath. “On Saturday afternoon, Brown was shot to death by a police officer while apparently walking, unarmed, from a convenience store to his grandmother's apartment in Ferguson, a working-class suburb north of St Louis, the main hub of this midwestern state.” Ferguson police later introduced a videotape of Brown exchanging angry words with a convenience store clerk. It initially appeared that Brown stole some cigars, but a look at the whole tape showed he did no such thing and Darren Wilson, the policeman who shot Brown, wasn't aware of what had happened in the convenience store in any event. 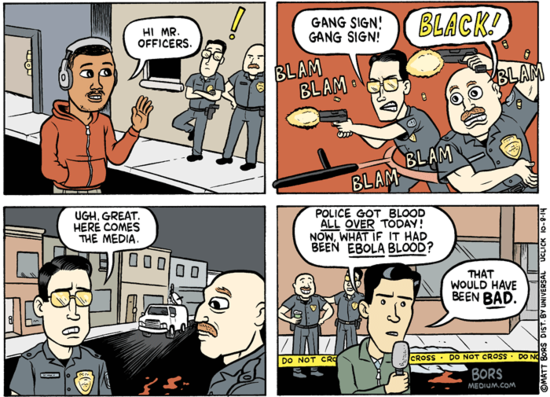 Cartoons of course, routinely present situations in exaggerated and hyperbolic ways, as the one pictured here does. But the line between hyperbole and real life becomes blurred when other police officers in the same geographical region demonstrated a similar police response to another citizen. “Cops say [Vonderrit Myers Jr.] fired a gun.” Problem is, non-police eyewitnesses, who saw Myers beforehand, maintain that all he had in his possession was a sandwich. There has been no independent confirmation that Myers ever had a gun. Police Chief Sam Dotson, of the St. Louis Metropolitan Police Department, claims that a 9mm Ruger handgun was retrieved from the scene and ballistics tests are being run on it, but Myers was already wearing an ankle bracelet for a charge of gun possession and both the mother and pastor of Myers say he absolutely did not possess a gun.


A piece from Popular Resistance adds details that cast even more doubt on the charge that Vonderrit Myers Jr. posed any sort of threat to the off-duty police officer who shot him. The piece also goes into the question of why our police seem to be getting out of control lately and apparently now pose a greater threat to unarmed citizens than to criminals. Privatization seems to be a real driver of this new unaccountability. Privatization changes the mission of police forces so that what the public needs is no longer important. What the private interests who pay the salaries of police need becomes the new priority. A very disturbing case was that of San Francisco 49er Ray McDonald and his pregnant girlfriend. She called for police assistance as he was beating her, public policemen showed up, but a private policeman was already on the scene. “In the case the first officer on the scene worked for the 49ers and represented the interests of Ray McDonald.. What was said? Not said? Was the victim intimidated? Was evidence hidden, destroyed? Was McDonald prepped by his employee as to what he should say or not say?”

Another problem was pointed out by The American Prospect. Exactly how are brutal, out-of-control police punished for bad behavior? The answer isn't comforting and goes a long way to explain why police feel invulnerable. If cases are won and civil penalties are assessed (Hard to do as the public is very supportive of police departments generally), then steep payments are made. But payments generally come out of city funds, and by extension, they come from city taxpayers, not by the particular police department that behaved badly. As police operating budgets are rarely affected, there's no reason for police to avoid bad behavior.

So how do we judge the response of the St. Louis region's black community to police abuses? The US Social Forum (Coming to Philadelphia in June 2015) takes an “all-of-the-above” approach to resolving social issues, or a “full-court press” as basketball players would say. It's good to use street demonstrations and a peaceful demonstration is always better than a violent one, but getting involved in voting and long-term organizing is a critically necessary element to achieving long-term success. That's just what the black community of the St. Louis region is doing. “...3,000 Ferguson residents (total population is 21,000) have registered to vote. And that’s good. Certainly some of the problems that led to Brown’s killing have to do with a political system that is not representative of the citizens it is charged with governing. In a town that is two-thirds black, only one of its six city council members is also black. If more than 6 percent of the black residents had voted, there would likely be a different mayor, and perhaps a different police chief.”

Actions like the singing at the St. Louis Symphony and more routine, less photogenic actions like registering new voters, are both necessary elements in making progress towards a more fair and inclusive society.


The St. Louis Symphony was interrupted right after intermission with about 50 people dropping banners and singing “Justice for Mike Brown.” When the office who shot Brown was identified, the Ferguson police muddied up the issue by introducing a tape of Brown exchanging angry words with a convenience store clerk. The full tape showed that Brown did not commit a crime. Is the cartoon here an exaggeration of police-citizen relations in the area? Unfortunately, not by much. The later shooting of Vonderrit Myers Jr. appears to be even less defensible than the Michael Brown shooting was. Why are these shooting happening? Privatization of police and the lack of any direct connection between penalties and the misbehaving police departments both appear to be factors. What to do? Well, the US Social Forum (Coming to Philadelphia in June 2015) takes an “all-of-the-above” approach to resolving social issues and the black community of Ferguson appears to be taking that approach as it's getting lots of voters registered.

Posted by Rich Gardner at 14:02 No comments:
Email ThisBlogThis!Share to TwitterShare to FacebookShare to Pinterest
Labels: civility, criminal

I was getting very frustrated with my Windows computer ( My Linux one was working fine) as the browser (Chrome) kept opening up new tabs and windows and giving me a "warning" about websites that I knew weren't problems. It kept urging me to call a particular number (Which I had absolutely no intention of ever doing) and finally got to the point where it interfered with the operation of the browser that the whole thing was becoming useless.

I took the computer to a tech support service and they fixed it up some. They improved the speed and reduced some of the clutter that I had been experiencing. I used Internet Explorer as my browser for awhile as that's the Windows default browser, bu eventually opened up Chrome again. %$^#@!! The problem that I brought it in for was still being a problem!!! As the problem hadn't occurred in Explorer, I decided to go to the tech support site for Chrome.

Boo-yah! With three exchanges, the problem had been identified and solved! My experience with the tech support company was not a waste, but it brought back to me how many times I and the data tech people in the Navy and I disagreed. Yeah, they were smart and informed, but I often knew just as much about certain aspects of computers as they did.
Posted by Rich Gardner at 19:44 No comments:
Email ThisBlogThis!Share to TwitterShare to FacebookShare to Pinterest
Labels: computers
Newer Posts Older Posts Home
Subscribe to: Posts (Atom)