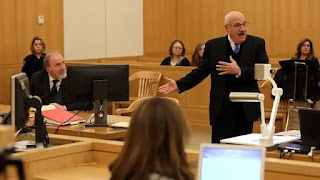 PBS put out an episode of Frontline that’s a bit less than an hour on how Donald Trump has handled the COVID-19 pandemic. PBS is less partisan then the media I normally consume, so I recommend it for people who are more middle-of-the-road than I am. The episode blames President Obama for not leaving the US as prepared as he could have. I found all of their arguments on that score to be reasonable and well-documented.

They had a Rear Admiral who was in charge of the  FEMA Supply Chain Stabilization Task Force who was, wow, he sounded straight out of the Vietnam War "Five O'Clock Follies," and just kept repeating that everything was fine and everybody was well-supplied. The report makes it clear that neither assertion was true.

What particularly infuriated me was when the President had a "meeting" with regular doctors (Around the 30 minute mark in the episode). With Trump sitting down, everybody else standing and everyone facing the camera (Trump had to crane his neck back to talk to people), it was crystal clear that the "meeting" was intended to be nothing more than a quick photo-op. The President clearly had no interest in getting input from the field.

One of the weaknesses of the episode is that it nowhere mentions that the US shipped off large quantities of supplies that we urgently needed here at home. Nothing wrong with helping out other countries, as long as we have a fully-functioning supply chain that’s busy cranking out enough supplies for both US domestic needs and for what foreigners need. This Twitter thread details the large quantities of supplies that were sent off to other countries in March. Apparently, the Trump Administration ceased to do this at the end of March, but it’s just amazing that they had so little concern for what our own domestic needs were.

The result of all of these shortages of basic equipment and of the President slacking off on the wearing of masks is that we’re now heading for a third peak of infections! Every other country just had one. They might be headed for another wave of infections, but the US never stopped getting a high rate of infections, so our ”wave” just keeps getting higher and higher.

The President admitted on October 15th that he owes around $400 million. This is extremely serious. When agencies investigate people for security clearances, one of the first things they look at is whether the person is financially secure. If they’re not, they’re open to being blackmailed! This, in light of the fact that the President has tried extremely hard, throughout his presidency, to keep his income tax returns a secret. CNBC:

Since entering the White House, Mr. Trump has broken with tradition set by his predecessors by not only refusing to release his tax returns but by waging a legal battle to keep them hidden.


What else is he hiding, even after the NY Times revealed many years worth of tax returns? Point 3 in the CNBC report says that Trump has lost $315 million on his golf courses since 2000. The United States has an extreme security risk in that the President owes so much money and that the US still doesn’t have a complete picture of his finances.

Amazingly, there are still people who are skeptical that Russia interfered in the 2016 election. The Republican-led Select Committee on Intelligence concluded that Russia intervened from 2014 to 2017. Is Russia still meddling? Well, if the Trump Administration is trying to show that Russia isn’t meddling, it’s taking actions that increase Democratic suspicions rather than to disprove them.

How has the President been on dealing with three foreign countries? Sure, Europeans may disdain him and think he’s uncouth and disloyal to NATO, but hey, he’s been effectively dealing with Venezuela, Iran and North Korea, right?

Trump has been trying to conduct a “regime change” in Venezuela for quite a while now.  Juan Guaido – president of the National Assembly who is recognized as Venezuela’s legitimate leader by more than 50 countries, has been trying to overthrow Venezuela’s de facto president, Nicolas Maduro since January 2019. The latest attempt was in early May. Venezuela is undergoing a massive humanitarian crisis with a 94% poverty rate, but Hollywood fantasies expressed in initiatives like Operation Gedeon give the government legitimacy and encourage Venezuelans to “rally ‘round the flag” in opposition to the imperialist US.

The “Maximum Pressure” campaign against Iran has been similarly unsuccessful.

While many ordinary Iranians are suffering, the economy is not in total free fall, as many in Washington hoped for. Instead, the country has shown signs of economic recovery, with domestic production and employment increasing. According to Iran’s Central Bank chief Abdolnaser Hemmati, Iran’s nonoil gross domestic product grew by 1.1 percent last year. Prominent Iranian economist Saeed Laylaz also contends that Iran’s economy can weather the coronavirus pandemic and may experience growth this year despite the virus.

For years, the Trump Administration has taken the view that Iran was about to collapse and surrender any day. Clearly, that’s not going to happen.

How has the US been doing with North Korea? It’s hardly Trump’s fault that North Korea threatens the US with nuclear weapons. They’ve been doing that under many leaders for many years. ArmsControl.org refers many time to “denuclearization.” But has North Korea agreed to a definition of the term? It’s impossible to engage in any serious negotiations unless both parties agree to terms that are critical to the issue that’s under discussion. Apparently, according to NK, that term means that everybody in the entire world must decommission their nuclear arms all at once. The US is, of course, highly unlikely to ever agree to this. In July of this year, North Korea declared that denuclearization “is not possible at this point in time.” So, despite President Trump making many cheerful declarations, diplomacy with NK isn’t any further advanced than it was when Trump entered office.

There are many other issues we could discuss, including the President’s apparent belief that he’s free to discuss wacky theories like what QAnon brings up as though he’s just some private citizen that no one takes seriously, but he is taken seriously by many millions of people as they, quite reasonably, believe that he has access to the best and most current information.

My view is that he’s accomplished nothing of note in the last 3-plus years and that his record simply does not justify giving him another term.

Update: The former star of Cheers, Kirstie Alley, weighs in on the election:

Kirstie Alley
@kirstiealley
· 9h
I’m voting for @realDonaldTrump because he’s NOT a politician. I voted for him 4 years ago for this reason and shall vote for him again for this reason. He gets things done quickly and he will turn the economy around quickly. There you have it folks there you have it

1. Agree. Trump is an utterly incompetent politician. 2. "He gets things done..." Erm, ah, no. No, he doesn't. He can't get things done at all. See the above essay. 3. "he will turn the economy around..." For the same reason he can't apply "Law 'N' Order," no, he can't turn the economy around because he's responsible for the horrible shape that it's in today. Nothing is going to change after a successful election.