It's funny how for years and years, right-wingers would express great derision and contempt for those who discover new rights. Roe vs Wade saw privacy rights that weren't expressed before, "Human Rights" in the late 1970s were considered a dangerous innovation, detainees incarcerated by the US under "War on Terror" theories were challenging their imprisonment based on habeas corpus (Does that doctrine apply to prisoners of war? Did the detainees even have that status?) etc.

A bit of background: In September 2002, President Bush made a speech about Iraq that was supposed to have Americans quaking in fear over Saddam Hussein's Weapons of Mass Destruction and anxious to rush over there and stomp the whole country. Instead, two weeks after the speech, a substantial number of opponents of the proposed war showed up in Washington DC to conduct a protest against it. 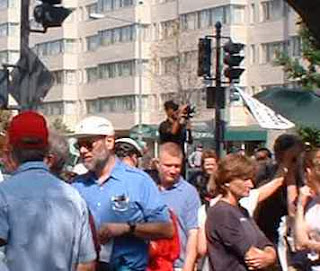 This is a picture I took an hour before the protest began. This was the first and last time I saw a policeman openly taking pictures of protesters. Did protesters make a legal complaint or did the police decide that their picture-taking wasn't having any deterrent effect? Who knows? Note that the crowd is like "Okay, our protest is being surveilled. Well, that's the price we pay for freedom and dissent." We collectively understood that political activity carried a bit of risk and we accepted that price.

So I had to chuckle mirthlessly when Rick Santorum published a piece in the Inky today about proponents of Proposition Hate Eight being politically attacked (They had signed a petition stating that they didn't wish to see equal rights extended to gays and lesbians, progressive groups asked that their names be revealed, they panicked at the thought that their neighbors would know their political leanings) and how those who have expressed hatred for their fellow citizens should be protected from discovery by their neighbors.

Now, I'm generally in favor of all sorts of new rights and privileges being extended to citizens, but since when did we ever have the right to support controversial political causes anonymously? Voting is an act where we must register with our town or city with our full name and address, give our signature and in Pennsylvania at least, must sign a register before voting. If we give money to a political group or to a candidate for office, we need to fill out a form declaring who we are, where we live, how much we're giving, etc. No one is permitted to wear a mask at a protest rally due to (More or less reasonable) fears that they might be a terrorist who might set off a bomb and then escape without anyone knowing who they are.

Santorum decries the liberal lack of respect for people who wish to deny their fellow citizens the same rights that they have and to some extent, he's got a point. But that point extends equally well to his side of the political spectrum. The town hall mini-mobs of August 2009 were not exactly exercises in decorum or respect. The bulldozing of CDs made by the Dixie Chicks reminded people of the burning of books in 1930s Germany. And the commentaries by prominent people like Glenn Beck don't really help the cause of civility.

So, I'm sorry, but I really can't work up much concern over people who want to engage in politics anonymously.
Posted by Rich Gardner at 13:32
Email ThisBlogThis!Share to TwitterShare to FacebookShare to Pinterest
Labels: civility, right-winger