PRAWN Blog: Good Behavior: Saw a few ads for the second season of the TV show “ Good Behavior ” and saved an episode and finally saw it today. The two main char...
Posted by Rich Gardner at 19:12 No comments:
Email ThisBlogThis!Share to TwitterShare to FacebookShare to Pinterest 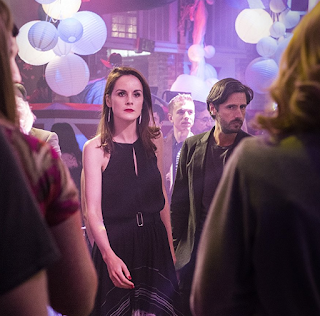 Saw a few ads for the second season of the TV show “Good Behavior” and saved an episode and finally saw it today. The two main characters Letty Raines (played by Michelle Dockery) and Javier (played by Juan Diego Botto) would clearly, if you asked them, state that they are villains, but that they’re trying to go straight.
Now, the villainy of Rainers and the past she’s trying to get away from is that she’s a shoplifter as well as a con artist. I spent the first few years of the 80s working in a department store in the security division. I just performed back-room support tasks, but listened in as my co-workers told tales of detecting and stopping shoplifters.
So I was interested to see what Raines’ techniques would be. I was mildly disappointed to see that they consisted of just walking into a shop, grabbing items, tossing them into her purse and walking out. She doesn’t have to deal with any surveillance, no tags on the clothing setting off alarms as she tries to leave, nothing. No art, no cleverness, no real challenge or drama to it.
Now, I understand why this is. Criminals really enjoy crime shows. They obviously don’t like seeing fellow criminals getting foiled or being punished, but they do enjoy seeing and learning from the techniques that the fictional criminals use. I also understand that there are probably some retailers underwriting part the advertising for the show and so the writers of the show don’t want to show any techniques that people might then use against their sponsors.
Eh, it’s a bit of a let-down. I’ll probably keep watching the show anyway, but I’ll have to settle for the complete lack of style on one of the villains parts in it.
Posted by Rich Gardner at 19:10 No comments:
Email ThisBlogThis!Share to TwitterShare to FacebookShare to Pinterest
Labels: capitalism, criminal, culture, law
Newer Posts Older Posts Home
Subscribe to: Posts (Atom)